Episode 1
Rea Sanka (散華 礼弥, Sanka Rea) is the female lead of the series. She is the deuteragonist, following Chihiro as the protagonist. She is the daughter of Dan'ichirō Sanka and Aria Sanka, but her biological mother died right after she was born. She currently resides in the Furuya Residence at the temple.

Her zombification her skin becomes almost entirely white and her purple eyes become crimson/blood red. She is described as 'very beautiful' by boys in Shiyou Boys High School. Placed diagonally on her belly is the long scar/gash that she sustained by the tree branch from the cliff-drop that killed her. She was accidentally pushed off a cliff by her father while trying to protect Babu, resulting in her death. She bears striking resemblances from her unnamed mother.

As the White Witch in the final chapter, Rea's overall appearance has changed significantly. As her hair is now sheet-white and somehow much grown longer and her right eye is covered. she also has leaves that seem to have grown into her hair. She wears a a full length gown that seems to cover her legs completely. She also wears a wooden mask that resembles the mythical mandrake plant.

Rea is quite friendly, especially to those at the shrine, but often suffers from indecision and hesitance to act in social situations due to her sheltered upbringing. She is shown to be extremely naive, needing more clarification to pick up on wordplay and some sensitive topics than most everyone else in the series. She lacks knowledge of the outside world due to her father having kept her sheltered inside the mansion most of her life. Overall, she is a gentle young girl who wishes only to live a normal life and be happy with her friends and family (though in the case of her family, that goal is portrayed as being much harder to achieve than she can handle, leading her to despair.) If her goal of achieving a normal life can't be reached then she would rather just end her own life than continue on.

As the White Witch, Rea seemed to have developed a teasing/prankster personality. As she doesn't mind trying to scare kids that visit her residence. Though considering her smiling face and joy at seeing Mero's grandchildren visit her, it may simply be all an act to keep herself entertained due to her long life.

Rea's zombification after her death stopped most of her body's vital organs, changing her skin colour into pale white. Her irises are blood/crimson red instead of the deep blue/purple they were when Rea was alive. Also, her body's physical limiter was broken, granting her increased strength and endurance. Due to this, Rea can easily down an opponent, lift objects about three times her weight, and shatter chains(as this happen when she was held captive by two Sanka maids while wearing costumes). It was stated by Chihiro in the series' OVA that using this new strength, while it may be impressive and it may make her like a superhuman, it can put a huge strain on her body's muscles to the risk of having one of her arms ripped off.

However, her body is still a corpse and she will undergo decomposition as time passes. To prolong the effects of the resurrection potion, Rea must regularly consume hydrangea leaves, as the leaves' poison was used to resurrect her. The leaves allow her to retain her human mind and consciousness and slows down the decaying process, but cannot stop it completely. Lastly, her nervous system has been shut down, making her mostly unable to feel temperature and pain. Strangely, however, she cannot run faster because she still feels exhaustion, ironically she also can't sweat. Apparently, she is able to communicate with Babu, who is a zombie himself, even though he is also a cat.

Rea steals and drinks some of the zombie potion made by Chihiro in an attempt to commit suicide because of her closed-off and irregular life. However, she fails in the attempt but instead is resurrected as a zombie after accidentally falling to her death from a cliff.

She likes Chihiro very much, but feels that her presence is intruding or putting strain on Chihiro's and Ranko's relationship. She also seems to have a connection with Bub, which Chihiro notes could be a telepathic communicative trait between zombies. She's also quite physically strong as her body is no longer restrained by her brain as a result of her death.

Rea is revealed to be a new, special case of zombification similar to that of Chihiro's mother. Instead of losing her humanity, her love for certain things (such as Chihiro) turns the zombie's stereotypical hunger for flesh into a lust which causes a state of "Eater Confusion". After Rea tries to eat Chihiro out of lust at festival, she runs away and is tracked down at the abandoned hotel when Chihiro awakes two days later. She attempts to seal herself away in the well but Chihiro drags her out, and she once again attempts to eat him due to the Eater Confusion status. With his dying words, Chihiro confesses to Rea which returns her humanity in time for her to protect him from the collapsing roof.

While on ZoMA Island, Rea was given brain surgery that took a large portion of her memories. In an attempt to re-jog her memory, Chihiro and Ranko reacted the night Rea tried to eat him. While this doesn't bring back memories, but does put her back into the confused eater state. Shortly afterward, Darin threw hydrangea leaves at her and brought her back to her normal state.

After a while Rea slowly losing humanity and turning into the 'confused eater' state, she attacks the Furuya family including Ranko while she was at Chihiro's house and manages to bite Don's arm in the process. Stating that 'this isn't the taste she wanted'. She went to the Sanka High and attacked Aria while she was drunk in her office. Later Aria and Ranko manage to lock her down in the auditorium.

On the way home after learning the truth from Otoki (Jogoro 2nd wife), Chihiro and Darin came to Furuyama's Shrine only to found Mero covered in blood, they also found Chihiro's father, Don greatly injured by the wounds in his hand after being bitten by Rea. Chihiro also learns that Rea went to the Sanka High and pursues her.

In the auditorium, he founds Rea in the "Terminal Eater" state and doesn't remember anything about him, even don't want to bite Chihiro's arm stating that "This is not what I'm looking for." Chihiro realizes that she's completely forgotten about him, had given up the situation only when Rea's father came in and slaps him for not being "responsible" in what happens, he also states that he went to ZoMA Island after Chihiro and Darin left the island and met Chihiro's grandfather, Jogoro.

He also learns everything about the zombie research, and tells Chihiro that he's the only hope to revive Rea. While conversing, Rea attacks them and wound her father on the neck. He was not fatally wounded and gets back up again. Rea then attack Chihiro only to be kissed by him and bit his lips in the process.

Sometime later, Rea is seen outside a run-down shrine only to be called by Ranko and Darin to go with them to the Reunion. At the reunion while Rea opens the door to get out, she was surprised by Chihiro outside the door. The two then takes some time together; Chihiro tells Rea that he went to a hospital abroad to get surgery because he has lost a heart in the event at the auditorium and got a heart transplant. Chihiro then asks Rea about what she wanted to tell, Rea the confess that she 'enjoyed her delicious meal' only to realize that says a wrong thing and laughed by Chihiro.

Many years later the folklore of the White Witch that resides at an abandoned tunnel led a girl, Rai and a little boy, Tama interested in the story and went to checks if it's true. The story tells them to bring Hydrangea leaves to lure the Witch out. They went to the tunnel and begin the ritual to lure the Witch out. Only when the Witch came out and tells them that they can have one wish in the return that one of them must sacrifice him/herself.

Scared, the two then went out in panic, before going home Rai looked back and went running home again. The Witch then can be seen sitting at the top of the tunnel, saying that she hasn't thank them properly and tells them to say 'hi' to their grandmother. It is revealed the White Witch is Rea and what is she meant is up to the reader to guess.

Dan'ichirō is the overprotective father of Rea. His love for his daughter is almost incestuous, (due to his daughter‘s resemblance to his first wife and mother of Rea, who died after Rea was born) and has a habit of taking naked pictures of her on her birthdays. He has allergies to animals and is a clean freak. He has sheltered Rea for all her life, forbid her from touching animals because "it will taint her" and keeps a close watch on her friends. Rea feels pressured as a result. He gives Rea very little freedom and initially did not consider Rea's feelings. After being convinced by Chihiro about Rea's desire to live a life of a normal girl, he accepts Chihiro as Rea's protector. He also warned Chihiro that there should be no "sexual intercourse before marriage" possibly hinting that he accepts Chihiro as a man for his daughter. He later decides to leave for the United States, to find a way to cure Rea

Aria is Rea's stepmother. She used to be a maid for Dan'ichirō and was trained under a long-standing tradition in the Sanka family that future heirs are to marry the best of the maids. Dan'ichirō however met and married Rea's mother which he loved dearly until her death while giving birth to Rea. Although Dan'ichirō married Aria, he does not give her real attention and instead dotes on Rea, which has made their relationship a strained one at best. She secretly despises Rea due to how she's loved by everyone. However, as of episode 14 she appears to finally be softening on her daughter. After she, Rea, and Furuya have a strange shared dream; she removes the punishments she had put on Rea at school and stopped harassing her.

He promised Rea that he'd take responsibility if she becomes a Zombie. After Rea moved to his residence he conducts research on preserving Rea's body on a tent in his own room. He wants his first kiss to be given by a female zombie which he experienced first hand when Rea kissed him due to lack of the herb used for the potion. He also experienced becoming a half-zombie, revealed after being stabbed by Dan'ichirō with a fencing sword. This is due to him being bitten by Rea after the kiss (although the effects were only temporary). He also enjoys seeing Rea dressed as a Bunny Girl or a Nurse. Despite the fact that he's not interested in living girls, he managed to fall in love with Rea when she was still alive, and confesses to her while Rea tries to devour him, which brings her to her senses. He tries to approach her, however has difficulties given the incident and Rea's own embarrassment. 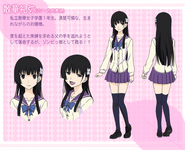