Ranko Saoji (左王子 蘭子, Saōji Ranko) is the first cousin of Chihiro. Often called Wanko by Chihiro, at times she also keeps on saying that Chihiro should use "-san" after her name. She likes teasing Chihiro and Rea as well. She likes Chihiro and develops a rivalry with Rea.

Ranko has short sandy blonde hair and green eyes. Her body is often emphasized in the anime due to her having large breasts and a big butt. She is usually seen in skimpy outfits, commonly wearing a red tank top and a pair of jean booty-shorts that reveal a generous portion of her butt. She also has a light tan complexion.

She is very supportive. She hates seeing others down and hates when people go about things too easily. She tells Chihiro that "kisses mean a lot and that you shouldn't do them so freely". She also gets annoyed when Chihiro doesn't show her any affection.

She is very sensitive, but she is caring. She tries to help others, since she doesn't like being lonely. She gets along well with the Furuya family and even Rea, despite being her rival.

She is a student of Sanka Girls' High School. She loved Chihiro and claimed him to be her fiance. Although she's openly competing against Rea and knows of her zombification, they've become good friends. However, she became scared of Rea eating Chihiro after the incident at the festival.

When she is invited for the barbecue at the Furaya house, she refuses and tells Chihiro that she doesn't want that thing (Rea) to eat him again. The next day, Chihiro goes to visit her at her house. The two watch zombie films and play games together. She then tells him that she is afraid that Rea might once again try to eat Chihiro. She reveals that she had stolen some Zombie Potion from Darin. She confesses to Chihiro and consumes the potion hoping that he would love her if she was a zombie. However, it is revealed that the potion was actually some stress relieving pills. When she wakes up, she tells Chihiro that she fine with her unrequited love.

She still continued to be a good friend of Rea and also helps her recover her memories after returning from Zoma.

Since Ranko was young, she developed a crush on Chihiro, and wants to have her way with him no matter how long it takes. He is about 6 months younger than her.

She knows Rea, like any other girl as the Sanka Princess. They met again when she found Rea in Chihiro's bedroom as a zombie. After learning of Rea's love for Chihiro, they became love rivals. 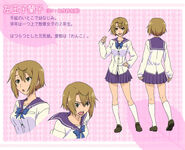 Ranko in the anime
Polski
Community content is available under CC-BY-SA unless otherwise noted.
Advertisement