Jogoro Furuya (降谷 茹五郎, Furuya Jogorō) is the grandfather of Chihiro and Mero. He is the creator of the resurrection potion, although his past is a mystery. It is hinted that he is also a zombie since he will occasionally eat hydrangea leaves to keep his body from developing Rigor Mortis. He seems to fear his past a lot because he shows signs similar to dementia resulting from the resurrection concoction after he was bitten during his scientific researches. He proves to have knowledge on the implications of the "resurrection" and tells Chihiro that Rea was indeed special when she regained her humanity after dying from the gash in her stomach.

He is an extremely short, elderly man with light green skin, gray eyes, and white hair. He sometimes wears glasses.

During the Meiji Period (1868-1912), Jogoro was a large man. In fact, he was the biggest man in his village. He wore traditional clothes and resembled an older, rugged Chihiro. After his first wife, Sada, passed away, he began creating the reanimation elixir. During this time, he lost a lot of mass and his hair grew longer and whiten, as well as growing facial hair.

At some point, he shaved his facial hair, but kept his hair long. After freezing Otoki, he continues to live for another century. During this period, he lost even more mass and grew shorter due to the after-effects of the reanimation potion. This also caused his skin to turn green.

Jogoro's grandson, who was responsible for resurrecting Bub and Rea. When sober, Jogoro sometimes provides help for Chihiro regarding zombies and the potion, and reveals his reason for creating the potion in the first place.

She and Jogoro were acquaintances during their time at ZoMA.

His only daughter, and one of the few people who knew of Jogoro's experiments. After being involved in an accident, she requested Jogoro to resurrect her as a zombie.

Jogorō Furuya has had several wives in his long life. Including but not limited to Sada (first), Otoki (second, the frozen zombie) and Kiyo (third). 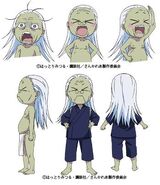 Jogoro during the Meiji period
Deutsch
Community content is available under CC-BY-SA unless otherwise noted.
Advertisement