Darin is a character appearing in Sankarea: Undying Love. She works for ZoMA and was Jogoro's former assistant before he retired. She first got involved in zombie research at the age of six, in an attempt to make her father love her. Despite being only 14 years old, she is a scientist. She has a considerable amount of knowledge about zombies although it is inferior compared to Jogorō's. She tends to become aroused at the thought dissecting zombies and wishes to use Rea Sanka as a research subject, much to Chihiro Furuya's dismay. However, due to the fact that she's more reliable than Jogorō for information, Darin has a give-and-take relationship with both Chihiro and Rea. Her relationship slowly begins to change given that Rea treats her as a friend. With her Brain "Limiter" off, she is able to act as a half-zombie, similar to how Chihiro was once. She also has a modified zombie owl named 18. She injects herself with zombie poison, which gives her zombie-like abilities while maintaining her humanity.

She was originally portrayed as being cold and evil, indifferent towards the lives of her test subjects. (due to her broken childhood). It was later shown that she wasn't evil and still had some sense of humanity left inside of her. In chapter 32, she had shown signs of jealousy due to her father preferring Rosalie more than her as a daughter. In chapter 35, she asked her father if he had any personal feelings as well about his research but ended up being slapped by him.

She does not like reading fiction, once stating that it is very troublesome thinking about the emotions of the characters in the books. Instead, she uses her spare time reading about new scientific discoveries and theories. It is also implied that she is very knowledgeable in modern technology, due to the high-tech equipment used at the facility she works in and the fact that she is able to program her pet zombie owl wirelessly.

She once states to Rea that she does not care about matters concerning love, but ironically massages Jogoro Furuya with her feet and dresses in a very mature outfit. It seems that she favours a tropical flower much like how Rea likes hydrangea and is associated with it. She is level-headed and mature for her age, perhaps due to her long-time involvement with scientific research and her lack of family life.

She has a thin and slim body. Her hair is blonde, and she also has Heterochromia (a condition that makes one eye color different from the other). She doesn't really care about the outfit she is wearing as long it fits and is easy to move in. Despite being only 14 years old, she somehow resembles a 17-year-old girl. She typically wears a strand of hair in the front clipped to the right, and the rest of the hair are worn down. She has many sets of the same black pareo and matching gloves and heels. Rea once commented that she had nice breasts. She once told Chihiro that she stank of zombies because of her long time involvement in the zombie research facility.

Salva Arciento Kurumiya: She cares about her Dad, despite her father not reciprocating her feelings. Darin tries her best to make her father approve her as his daughter. After her father applauded her for helping him cut open a zombie at the age of six, she continued with the Zombie research in the hope that maybe her father would approve of her. However, she later grew to despise him and was happy that Rosalie killed him.

Chihiro Furuya: It is hinted in the manga, that Darin might have romantic feelings for Chihiro.

Jogoro Furuya: She and Jogoro are an old acquaintances due to their association with ZoMA. 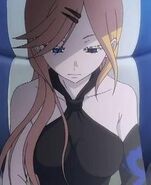 Darin reading about zombies on an airplane. 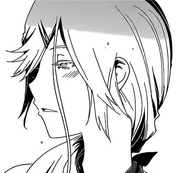 Darin in the manga 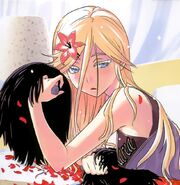 Darin and Rea taking a photo together.

Darin when she was six (massaging Jogorō with her feet).

Darin and her father joining ZOMA.
Community content is available under CC-BY-SA unless otherwise noted.
Advertisement