Episode 1
Chihiro Furuya (降谷 千紘, Furuya Chihiro) is the main protagonist of the series who has a zombie obsession/fetish. He uses an old manuscript to make a "resurrection" potion so that he can bring his dead cat back to life as a zombie. He goes to an abandoned building at night after his pet cat Babu's death.

Chihiro is a young boy who has light olive skin, cat ear-like black hair and droopy dark eyes. He is often seen wearing his school uniform. After being exposed to large doses of zombie poison, he loses a bit of his sight. This also caused discoloration in his right eye.

Chihiro is a very laid-back kind of guy. He is rather lazy, and dislikes work, but helps clean around the property when asked. According to his family, before Rea moved in, Chihiro was irresponsible in many ways, but after meeting Rea and promising to take care of her, he becomes much more serious. He is quick-witted and has an up-front way of presenting historical analyses that seems to make him an effective speaker, as evidenced by his ability to convince both Rea's father and her stepmother of their shortcomings. He has professed a huge passion for zombies ever since he was a little kid. He's not particularly fond of sneaking around and other such activities, but he will go to great lengths to strengthen his obsession and learn more about zombies and the dead. He enjoys watching zombie movies to a great length and is often seen renting them. His love for zombies has caused him to become quite knowledgeable about them, shown when he became aware that Rea's body would slowly rot away, unless he did something about it. Despite his obsession with zombies, he is very afraid of ghosts and other things involving live horror, such as haunted houses.

Chihiro is a first year student at Shiyou Boys High School. His father is a Shinto priest. He is a very big fan of zombies and isn't afraid to divulge his passion and discuss it amongst others. He makes use of an abandoned hotel at night to study the ressurection manuscript that he found before the start of the series. He was there every night trying to find the correct ingredients to bring his cat, Bub, back to life, when he saw Rea Sanka shouting in a well about how trapped she feels in life. She offers to do anything he wishes to buy his silence towards her outburst, but ends up sincerely wanting to help him create the potion, and comes back to the building to help night after night. During this time Furuya promised to take care of Rea if she ever became a zombie. The first subject on which he tested the potion was Bub, but before he could do so, Rea secretly stole some of Chihiro's potion to use in a later attempt to commit suicide due to the poisonous nature of the potion's ingredients. Her suicide attempt failed, but after falling off of a cliff and dying, Chihiro's potion's presence in her body ensured that she was ressurected.

After Rea's death and subsequent resurrection, Chihiro starts taking care of Rea as promised and eventually gets his father to allow Rea to stay with them. To carry out Rea's dream of becoming a normal girl, Chihiro starts his Zombie Observation notebook in hopes of preserving Rea's body, something he believes to be the most important step in maintaining her normality.

It is revealed that Chihiro's mother was a zombie and that she abandoned her family for fear of eating them out of love, due to the nature of the "eater confusion" status that she suffered from as a special case.

When searching for Rea after the festival, the two meet in the abandoned hotel and a fire begins to engulf the building as Rea attempts to eat Furuya due to the eater confusion status. This was broken when Furuya uses his final words to confess his love to Rea, returning her humanity in time for her to shelter him from the collapsing roof.

Chihiro has no memories of his mother being a zombie, but Otoki, Jogoro's second wife, revealed to him that Yuzuna was the third person in their family to be revived by Jogoro.

Within the ending of Sankarea, Chapter 55, Rea goes into the Terminal Eater state and eats Furuya, while remembering about the last time they had together. Chapter 55 ends with Rea becoming upset because she believes she killed Chihiro and ate him. It is later revealed in chapter 56 that Rea had eaten his heart, but due to the zombie poison that had entered his blood due to Rea eating him kept him alive long enough to save his life. Thus in the same chapter it is stated that he had an artificial heart after which he was given a heart transplant again (all the costs were funded by Dan'ichirō) and is still living peacefully.

While performing his research of bringing the dead back to life in the old abandoned building, he sometimes sees Rea going to the well near the building and shouting her problems about her lifestyle. He promised Rea that he'd take responsibility if she becomes a zombie. After Rea moved into his residence, he conducts research on preserving Rea's body on a tent in his own room. He wants his first kiss to be given by a female zombie which he experienced first hand when Rea kissed him due to lack of the herb used for the potion. He also experienced becoming a half-zombie, revealed after being stabbed by Dan'ichirō with a fencing sword. This is due to him being bitten by Rea after the kiss (although the effects were only temporary). In the manga as well as in the anime he was bitten by Rea so he is a zombie like his grandfather who was bitten while doing research. He also enjoys seeing Rea dressed as a Bunny Girl or a Nurse. Despite the fact that he's not interested in living girls, he managed to fall in love with Rea when she was still alive, and confesses to her while Rea tries to devour him, which brings her to her senses. He tries to approach to her, however has difficulties given the incident and Rea's own embarrassment.

Ranko is the first cousin of Chihiro. Often called Wanko by Chihiro, at times she also keeps on saying that Chihiro should use "-san" after her name. She likes teasing Chihiro and Rea as well. She likes Chihiro and develops a rivalry with Rea. She eventually confesses to Chihiro but realizes before answering that he loves Rea, she is however fine with her unrequited love.

Babu was Chihiro's pet cat that died in a car accident in three days before the start of the series, who was brought back to life by Chihiro while doing research of resurrection on him. Rea seems to understand Babu as a zombie. Like Rea his body is not restrained by his brain and was able to kill a much bigger fox. However, unlike Rea, he has not been able to stave off his zombie instincts.

Otoki was Jogoro Furuya's (Chihiro's grandfather) second wife, who was frozen after turning into a zombie. Chihiro finds her frozen body in the ice cave after he reads his grandfather's letter. Soon, Darin arrives and Otoki tells them about Jogoro's past, the resurrection drug and Yuzuna. 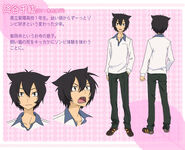