Bub (ばーぶ, Bābu) is the Furuya family cat, taken in by them when Chihiro Furuya was younger, after his and Mero Furuya's mother left.

Bub is first introduced in a fishing box packed with ice, with a white bandage tied into a bunny-bow around his torso.

Bub is a gray-black cat, with a darker tail with a fluffy pompom like end. He has a small body with black feet and a round face, with large eyes with dark slits for pupils (which are yellow and red), which reappear after he consumes hydrangeas regularly.

Prior to the start of the series, Bub died after getting hit by Chihiro's neighbor in a car accident. Wanting to see him move again, Chihiro attempted to resurrect Bub. After three days of reanimation attempts, Chihiro meets Rea Sanka, who suggests he try the only other poisonous plant he has not tried; Hydrangea. After giving Bub the potion, he was disappointed to see that there was no improvement.

With no signs of life, Chihiro gave up, packed Bub back in the ice box, and went home. Only after he gets home and Ranko Saōji forces him to open the fishing box, does Bub show that he is back to life. Bub with a crooked tail and crimped whiskers, complete with vacant glowing eyes jumps towards the moon. He must constantly consume the Hydrangea leaves, like Rea, in order to prolong the effects of the resurrection potion.

It was later discovered that Bub has shown signs of the 'turbid period' at night, and was responsible for the recent findings of half-eaten animal corpses surrounding Chihiro's village. In an attempt to bring him home, Bub attacks Chihiro, triggering Towa's (the zombie owl) defense mode. Bub ends up paralyzed and loses one of his legs. Feeling guilty for Bub's condition, Chihiro decides to give him peace and tries to cremate him, but is stopped by Rea. Due to his injuries, Bub can only drink liquid Hydrangea until he recovers.

During their time at ZoMA, Bub enter the turbid period again and attacks Salva. During the fight, Bub got inoculated by being drenched in the vaccine that Salva happened to be holding. This seems to have suppressed his turbid period. After the events at ZoMA, Bub is seen wearing a coat to hide the wounds on his body. The coat contains pockets for dry ice to slow down Bub's decay. Chihiro also asked Darin to attach a prosthetic leg to help Bub move around.

When Rea enters the 'terminal eater' period, Bub is seen struggling to approach the school in the heavy rain. He was soon picked up by Danichiro, and headed towards the auditorium where Chihiro and Rea are located. After the events in the auditorium, Bub and Rea lived in an ice cave away from society as Rea believes she should not live in the same world as humans. After two months, Bub passes away peacefully and was buried, with a stone slab to mark his grave. 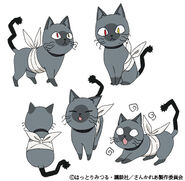 Bub's original funeral in the anime, with an offering of hydrangea, oblivious to its purpose in the potion

Bub's daily life before he died 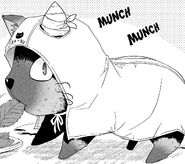